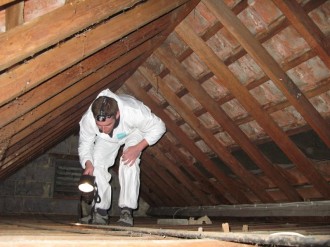 Inspecting a roof void for evidence of roosting bats

Much of work involves initial survey work of proposed new developments such as house renovations or barn conversions, often for private individuals.

I am a Registered Consultant (RC) under Natural England's Bat Mitigation Licence (BML) scheme (formerley Bat Low Impact Class Licence). This scheme allows a more streamlined and cost-effective approach to European Protected Species (EPS) bat mitigation licencing - I am one of few consultants in East Anglia who offer this service.

A typical bat survey for a private dwelling would involve an initial daytime inspection of the building/s searching for evidence of bats or the potential for the building/s to support roosting bats even if no evidence if visible. Often, no bat evidence or potential to support roosting bats is present and I will complete a short report of my findings that can be forwarded to the Local Planning Authority to confirm that a bat survey has been completed but that no issues were found.

Should bat evidence be found or if the building/s is/are considered to have the potential to support roosting bats then further survey work may be advised. This will usually involve evening/dawn surveys using specialised bat detecting equipment and automated camera traps to enable the type of species and roost present to be identified. I work closely with a team of highly skilled bat ecologists who assist me with larger-scale projects when necessary.

I am also experienced in undertaking pre-constuction bat surveys for proposed windfarms, having worked on various projects throughout Britain. 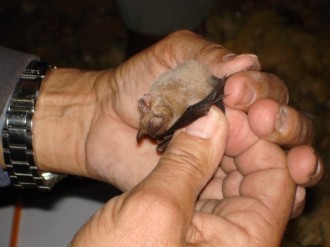 Checking the breeding status of a Lesser Horseshoe Bat

All British bats are protected under the Wildlife and Countryside Act 1981 (as amended) through inclusion on Schedule 5. They are also considered a European Protected Species under the Conservation (Natural Habitats, &c.) (Amendment) Regulations 2007, and as a result are one of the most highly protected species in the UK. It is illegal to:

A bat roost is defined as ‘any structure or place which is used for shelter or protection’, whether bats are ppresent or not. Anyone who commits an offence against a bat, even by accident, will be open to prosecution.

In addition, Article 6 of the Regulation requires member states to set up Special Areas of Conservation (SACs) for the natural habitat types in Annex I, and the species in Annex II present on such sites. The Annex II species include the following four British bat species: