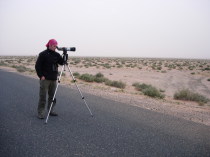 Richard Moores BSc (Hons) CMIEEM – Richard is the owner, Director and Principal Ecologist and he has worked in the field of ecology and wildlife conservation for 21 years, 18 of which have been as an ecological consultant. He has also worked for the National Trust where tasks included biological surveys and drawing up habitat management plans for Hazel Dormouse and Small Pearl-bordered Fritillary. Richard’s principal areas of expertise are in protected species surveys. As a respected ornithologist, Richard has completed demanding bird surveys throughout Europe and North Africa for organisations including the Royal Society for the Protection of Birds (RSPB) and Natural England. Richard is also a highly experienced and dedicated bat worker and possesses relevant licences to survey bats throughout the U.K. He dedicates much of his free time to ecological research, mainly in his home county of Norfolk but also in Morocco and the western Sahara, where he is currently studying the communities of desert bats and other mammals.

Richard Moores Ecology enjoys the assistance of a number of highly skilled and experienced sub-consultants, many of whom are considered experts in their respective ecological fields.